Securing
a
sustainable
future
for
rural
communities
in
Pakistan

The impressive New Khanki Barrage in Punjab Province, Pakistan, was completed in 2017. The barrage, which was financed by the Government of Punjab and the Asian Development Bank (ADB), is more than a kilometer (km) wide with an innovative design.

The new barrage has brought widespread benefits to the community, including increased agricultural output and income of over half a million farming families and far-reaching social and economic benefits, particularly for women and girls, through new health, education, recreation, and other community infrastructure.

The overall irrigated area under crops growing in the project districts increased from 3.32m ha in 2011 to 3.56m ha, a gain of more than 10% by 2020. Around 568,000 farming families benefited directly from the reliable irrigation water supply generated by the project. 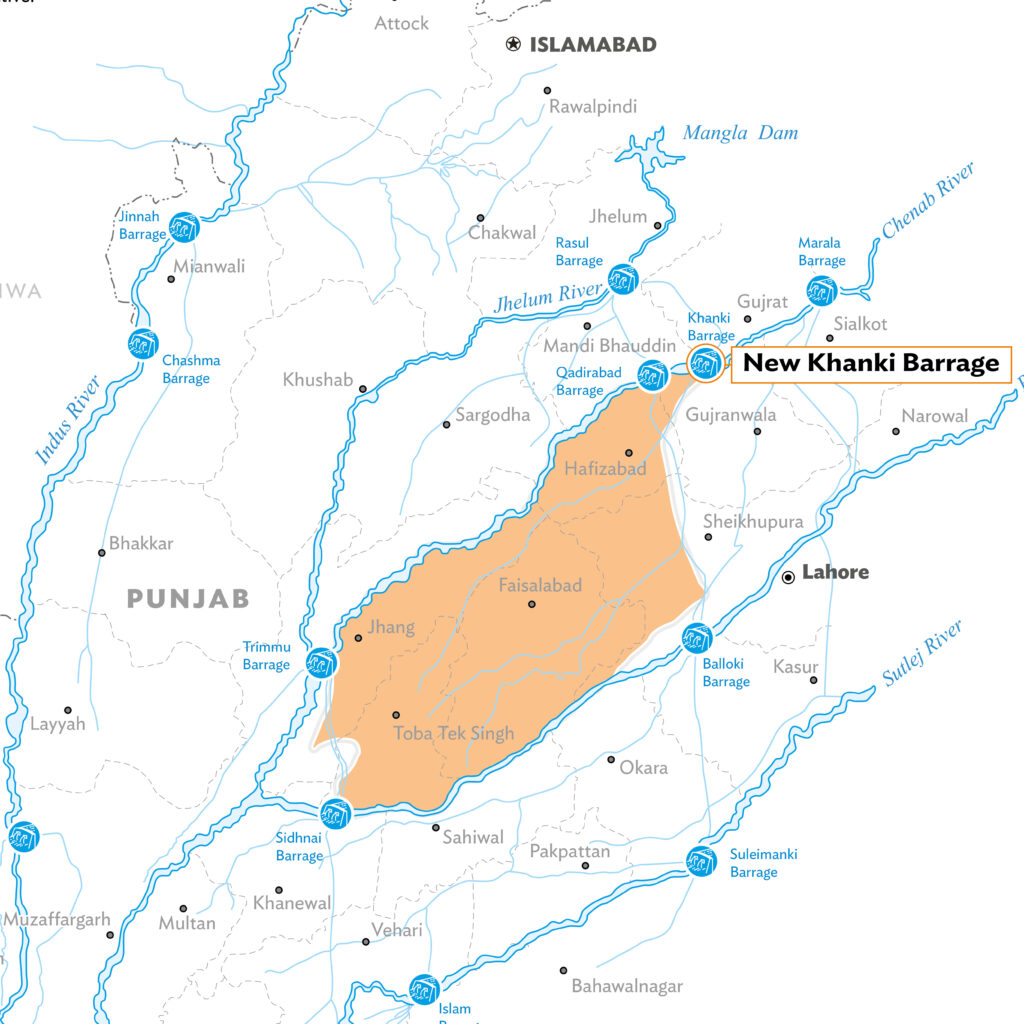 The design of the new barrage was guided by hydrological analysis foreseeing climate projections for river Chenab. These include the likelihood of frequent recurrences of extreme weather events, increasingly erratic monsoon rains, glacial melting, intense floods, and droughts. The barrage crest has been placed as close to upstream riverbed as possible. The head of water to control the canal is generated with radial gates instead of a weir crest. This allows the barrage to operate at a steeper slope to remove all the sediment accumulation upstream, instrumental in maintaining relatively clear water. The barrage and its hoisting system are fully approachable even during highest flood. Safety features were added to monitor uplift pressures under the structure through vibrating type piezometers. The whole system is linked with SCADA and sensors for gauge and gate openings which facilitates continuous discharge measurement.

A high- level lift irrigation channel and pump room has been provided, which ensures that areas near Khanki that are higher than the right bank of the Lower Chenab Canal, are supplied with water. A site workshop was provided to equip for emergency and routine repairs and maintenance of electro-mechanical system.

The large population in the vicinity of the new barrage, particularly women and girls, gained widespread social and economic benefits in education, health care, transport, recreation, and income generation. The project built a public road bridge, a girls’ high school, a health-care facility, and a large recreation park in Khanki Village.

The new 1,336m bridge over the barrage greatly increased connectivity between residents and businesses by decreasing travel across the river from the previous distance of 30km, to just 1.34km. Consequently, the profitability of existing enterprises increased, and many new business opportunities opened. Students have saved time and fare when traveling to schools, colleges. The school existing prior to the project provided education only up to 10th grade. The project also built a much-needed basic health unit.

Families from villages and towns in the district and beyond now enjoy a 6 ha landscaped park near the barrage. The park has many attractions, such as a play area, water features, food. It also has a new mosque with a separate prayer area for women. The park has become a local tourist attraction and a venue for festivals, providing recreational amenity for families from approx. 50 villages.

Under the social action plan of the project, Skill development training was given to the group of fifty men and women though Technical Educational & Vocational Training Authority. The candidates were selected from neighbouring villages on merit. Men were given training on Electrical Wiring and women were given training on Dress making and stitching and were awarded by certificates on completion. They were also given instruments and equipment to start their own businesses.

The Environmental Monitoring and Management Plan prepared by SMEC are an integral part of the planning. The Project is designed to support water supply and irrigation to over 3 million acres of land. Protecting upstream fish migration patterns by designing fish ladders for species like cod on either side of the barrage, this project aims to reduce the long-term environmental impact of the project for life below water.

To improve the environmental conditions of the area, Tree Plantation Plan has been prepared by the Contractor and approved by the Engineer. The Contractor planted more than 5,123 trees at the project site to enhance the aesthetic value of the site.

The project’s other tangible benefits included constructing a road bridge across the barrage along with sidewalks and constructing and rehabilitating 30km of approach roads on either side of the barrage. As a result, connectivity between towns and cities on each side of the river improved.

An innovative, community-based approach to irrigation asset management in India

Over half the population of Karnataka State in south India is employed in agriculture and related industries. Without reliable access to water, farmers struggle to maintain their crops and livestock, which can have far-reaching social and economic impacts.

"Break down the barriers through the quality of your contribution"

“I chose hydro and dam engineering as a career because it offered me the opportunity to be involved in projects which, I believe, make a long-lasting contribution to a society’s development, particularly in developing countries.”